How Did We Get Here?

Eagle Lake Camps / Blog / How Did We Get Here?

Here at Eagle Lake, our goal is to inspire Christ-centered love and commitment through counselor relationships in the midst of exciting outdoor experiences.

But we wouldn’t—couldn’t—be who we are today without the choices people have made over the last 100 years to bring us to this point.

Today, we want to share a little of that history: our story, which helps explain us. We hope you enjoy it! 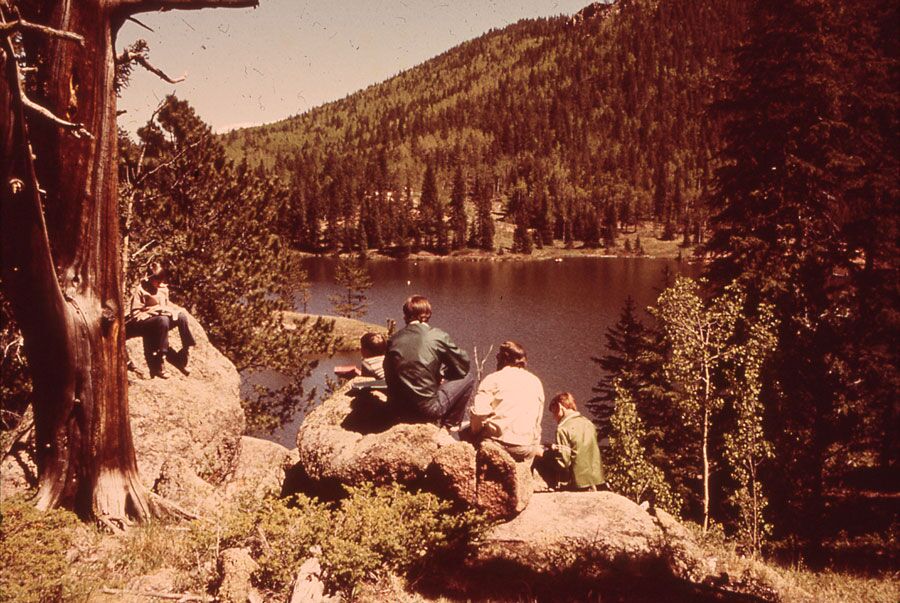 From The Navigator Archives

Let’s Throw it WAY Back…

At the end of the Civil War, General William Palmer made his way to Colorado, first visiting in 1867, then buying the land he would use to establish Colorado Springs and Manitou Springs in 1870 and the land on which he would build his magnificent estate Glen Eyrie and its castle in 1871. (The castle was originally a 22-room adobe and wood house, painted bronze green!) And only a few miles up Queen’s Canyon, he built a dam (ahem, a Darn) in 1906 to create what is now known as Eagle Lake.

Fun side note 1: Glen Eyrie hosted a Robin Hood Girls camp (unaffiliated with The Navigators) in 1916! Camping is in our DNA.

Fun side note 2: Our Store building was originally built as a hunting lodge to one of the early owners, although we’re not sure which one. 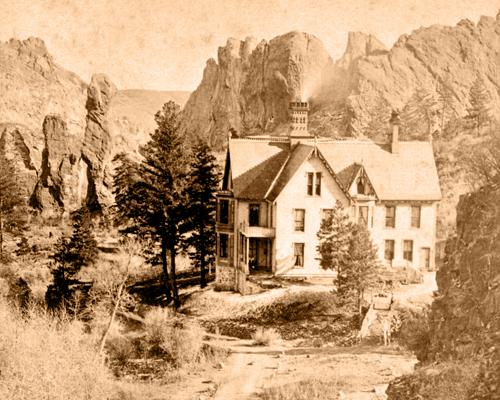 Our Rather Miraculous Beginning

A young man named Dawson Trotman first started ministering to young boys while teaching a Sunday School class in 1926. His ministry flourished, and by 1929, he had 225 boys in his boys club. It was for this group of boys that Dawson first designed a memory course with verses to memorize, blank cards to write them on, and a packet to put them in. (Sound familiar? Hello, early TMS!) Dawson, now convinced of the need for one-to-one discipleship, launched The Navigators in 1933. 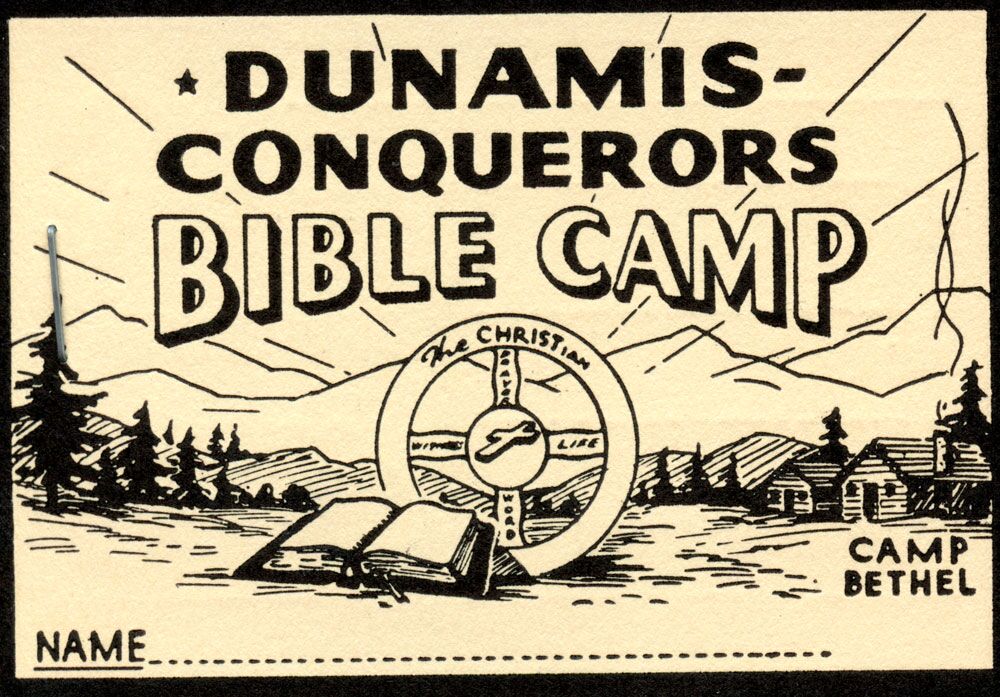 From The Navigator Archives: A flier for one of Dawson’s early youth camps.

In 1951, evangelist Billy Graham asked Dawson to help him figure out how to follow up with the thousands of people who were coming to Christ at his crusades. Dawson agreed, and in 1953 Dawson decided to move The Navigators’ headquarters from California to Colorado Springs.

Meanwhile, Glen Eyrie had changed hands several times, and was bought by Texas Oil Tycoon George Strake in 1938. Strake decided to sell it in the early ’50s. Although Billy Graham was originally interested in the property for his ministry headquarters, he decided to pass on it and suggested it to Dawson. However, in order to buy it, Dawson would have to raise $100,000 in six weeks.

According to the Colorado Springs Gazette, “Donations came in from all over the world, some in the thousands, but most in the $20 range. Trotman sold his car. A girl sold her wedding dress. Someone donated an accordion. A group of missionaries agreed to go a month without pay. On Sept. 29, the day before closing, they were $22,000 short. Somebody woke up a bank manager about a missing wire transfer. A businessman kicked in $8,000 at the last minute. And The Navigators were able to come up with the down payment.”

At closing, Strake told Dawson that he’d decided to also throw in the mountain property attached to Glen Eyrie via Queen’s Canyon. Thanks to Dawson’s early days working with youth, Eagle Lake Camp was born! 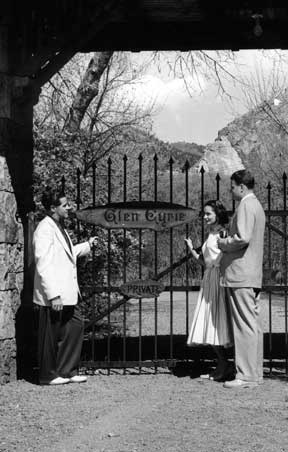 Back When We Were Young*

Photo courtesy of The Navigators Archives.

1957 saw the first junior high boys camp at Eagle Lake under the leadership of Cec Davidson. That week, 4 out of the 15 boys received Christ as their Savior! The following year, Director Don Enright launched several one-week camps and, a year later, extended the program to several three-week camps designed for 11 to 14 year old boys. By 1961, five camps were offered in which: “Trained Navigator counselors help the boys develop skill in canoeing, archery, fishing, crafts, swimming and horsemanship, and lead them in Navigator-type Bible study carefully geared to junior high needs and interests. Each boy can get plenty of personal counsel and instruction from his leader.” 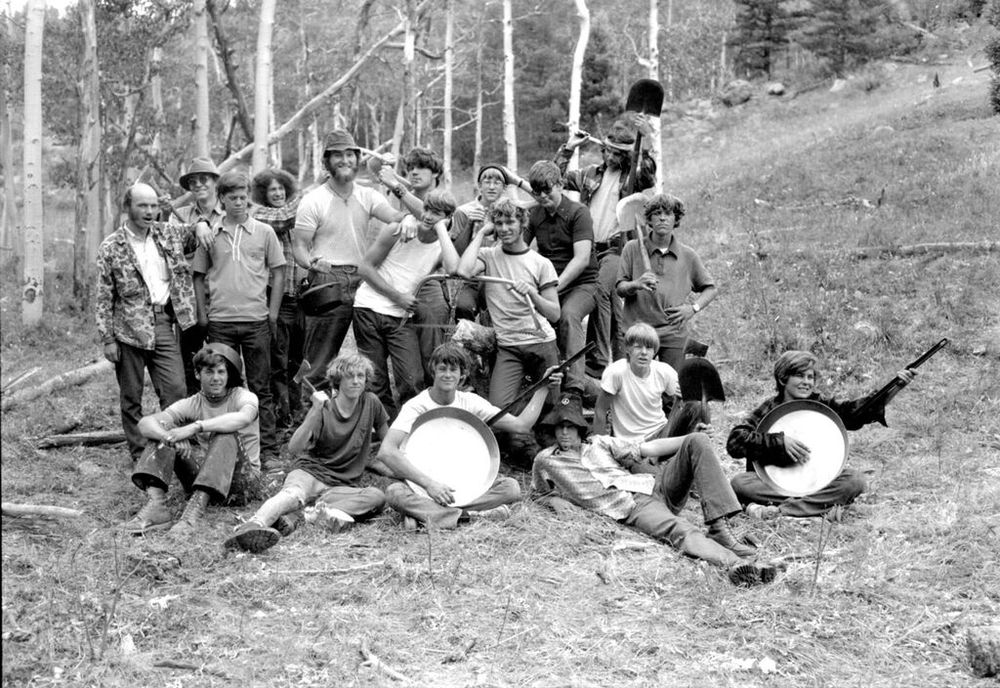 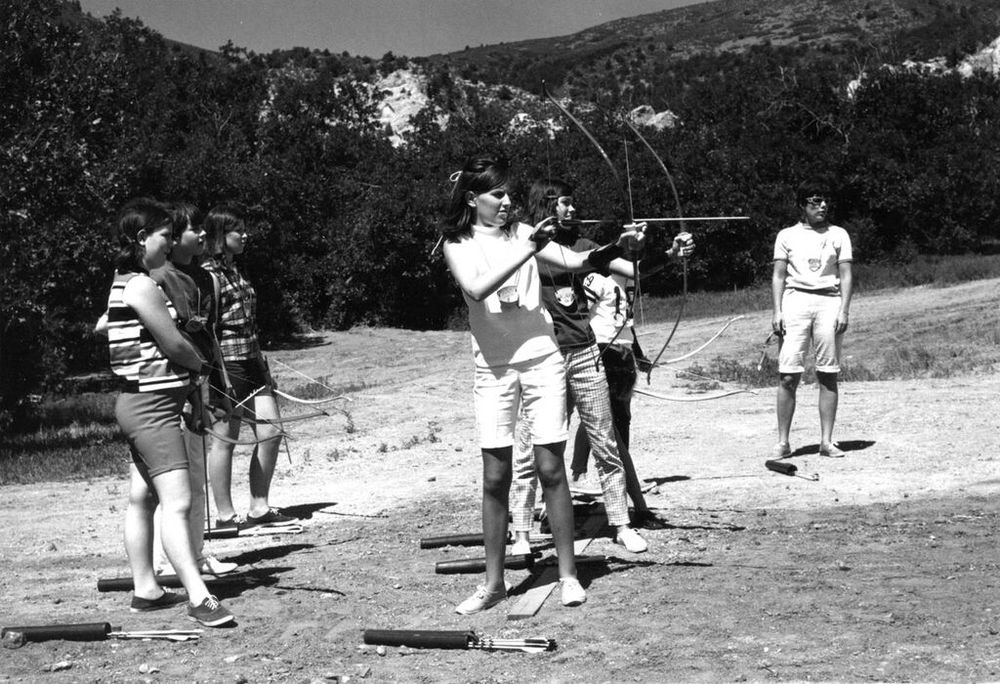 In the 1970s, Claude Oleyar took over as the director of Eagle Lake. A premier wilderness director, Claude developed incredible programming for our Wilderness Camps. This excellent wilderness adventure camp allowed campers to experience God’s majesty by exploring his beautiful creation in the Rocky Mountains. Traces of this early camp program can still be experienced in our current-day Excursions programs, particularly in our Rocky Mountain Challenge. 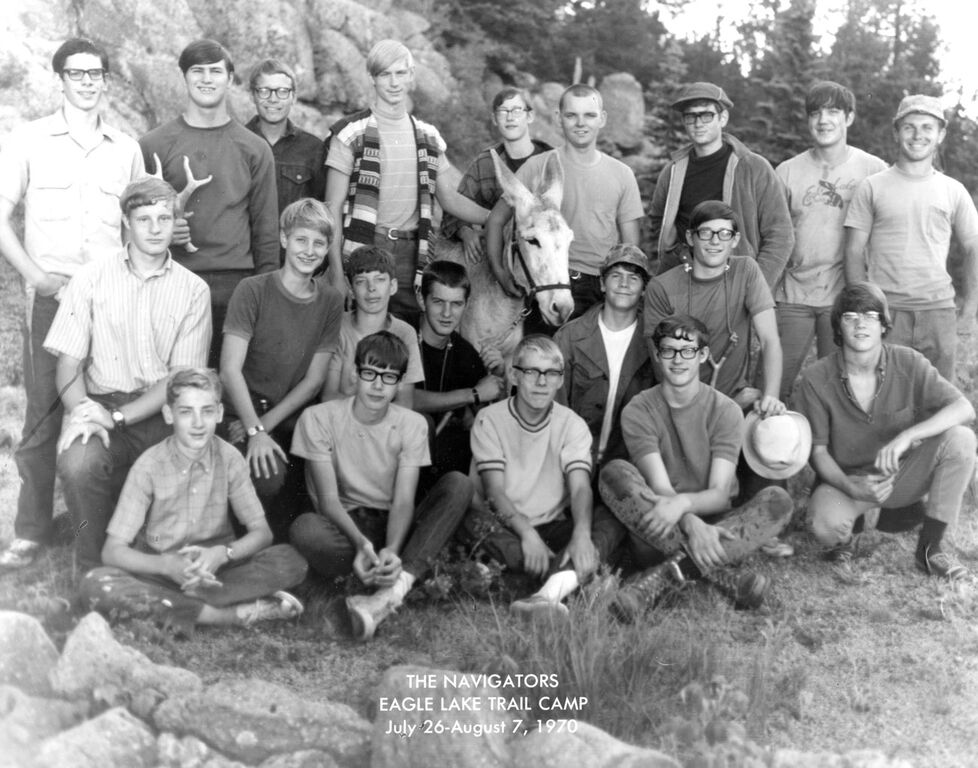 Photo courtesy of The Navigators Archives.

However, a cultural shift occurred in the 1980s. Youth preferred a more comfortable camp experience, and Eagle Lake had to shift its paradigm in order to survive an increasingly competitive summer camp market. 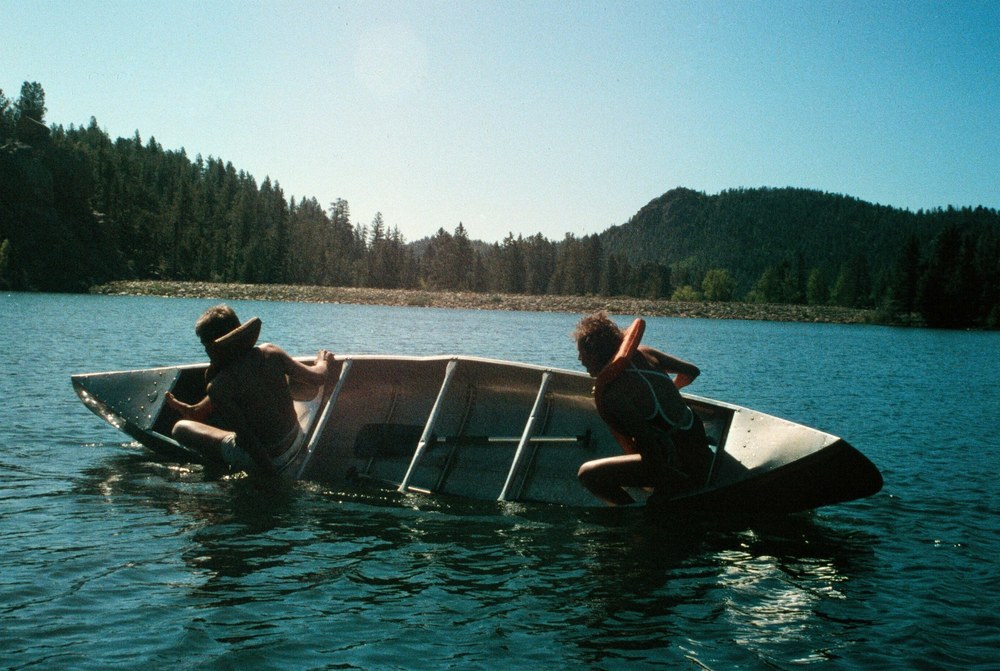 Life As We Know It Now

In 1989, Jack McQueeney took over as the director of Eagle Lake Camps to create the classic overnight camp experience that most of you know and love today. Instead of targeting the kids themselves, he shifted the focus to hiring highly qualified counselors who would build genuine relationships with kids, meeting them where they were at to inspire Christ-centered love and commitment. 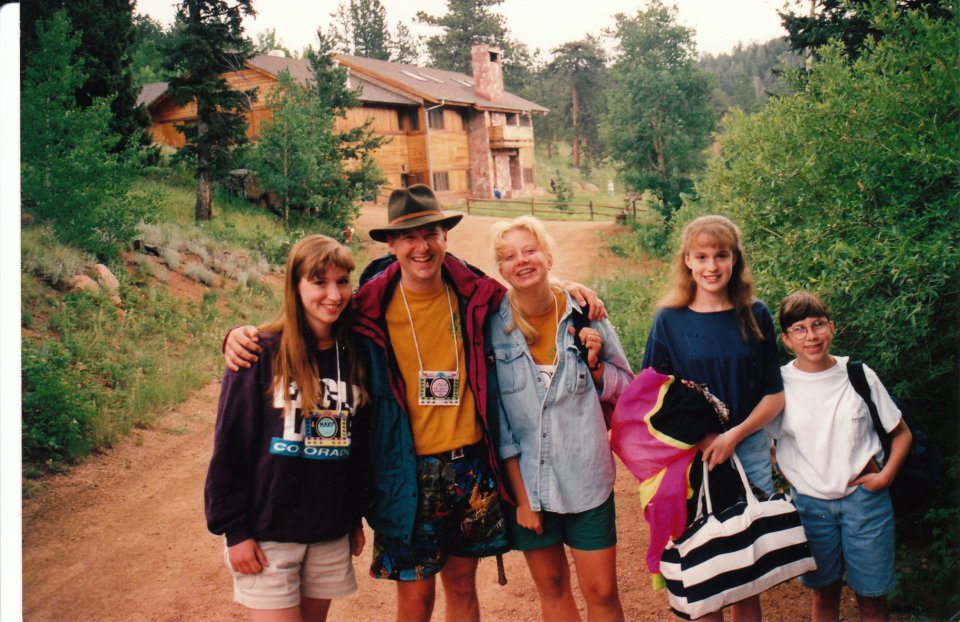 (That’s Jack in the shorts!) 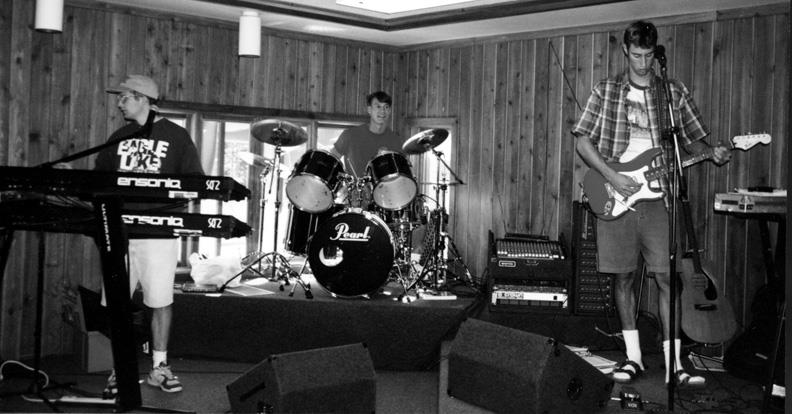 In the mid-90’s, we launched several new programs: we started a partnership with the American Diabetic Association to host a week of camp for kids with diabetes; we launched an excellent horse program which we sadly had to discontinue last year; and we started Crew, our most in-depth, discipleship program for high-school students. In 2001, we joined with our sister property to create the Glen Eyrie Group, and Mark Heffentrager stepped in as our On-Site Director.

In 2011, with our overnight camp thriving, our hearts were moved to extend our reach and ministry; thus On Location was born. Through On Location, we bring the best parts of Eagle Lake to local churches around the country, equipping them to reach out to their surrounding communities and to invest in the next generation.

However, all of this was threatened in 2012 with the onset of the Waldo Canyon Fire (cool video in this link!). Starting June 23, this devastating fire tore through Pike National Forest and Colorado Springs. Thankfully, it started on a Saturday and all campers and staff were off property. Although thousands of acres and many homes were burned, people all over the world gathered together to pray for the safety of Eagle Lake, and God graciously protected our mountain property.  Head firefighter Mike Vasquez remembered when he first arrived at Eagle Lake: “We were pulling onto the property and the fire came over the hill. We got out and prepared to start fighting it. About halfway down the hill, it stopped without explanation and moved west, circling the camp property. As I drove the rest of the way into camp, I realized why: on the hill above the lake, the old wooden cross stood, surrounded by scorched earth yet untouched by flames. God protected this place.” Today, you can still see the miraculous lines around camp where God stopped the fire from entering! 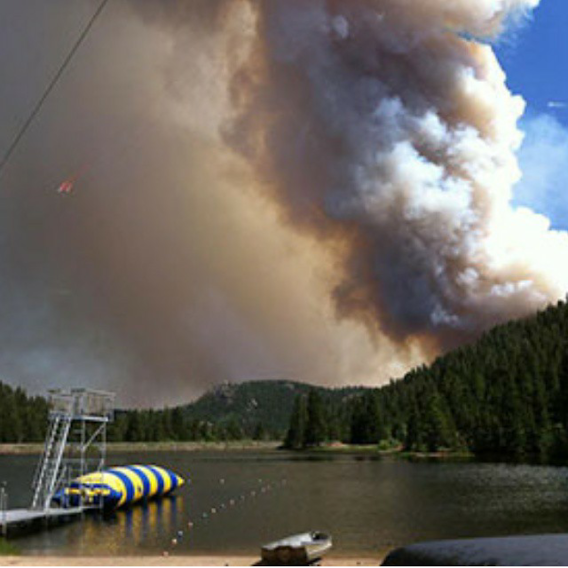 Because of the Lord’s great love and His compassion on and protection for our ministry, Eagle Lake just finished its 62nd summer of camp! Thanks to our highly-qualified staff recruited largely from Navigator collegiate ministries around the country, we are able to personally meet the thousands of campers that come on our properties each summer right where they are at, invest in them personally, and build genuine relationships with them. Our excellent programming and contagious fun make Eagle Lake an experience that campers, parents, counselors, summer staff, and full-time staff never forget! 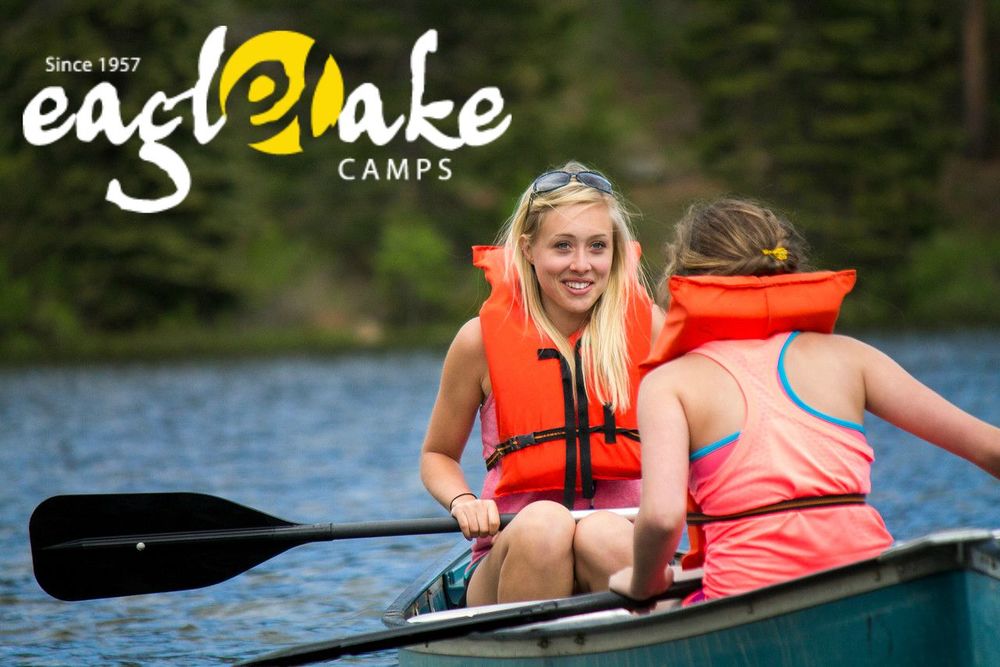 Thank you for being a part of this! Want to partner with us to make an eternal impact? Visit our Friends of Eagle Lake page to find out how. We could not do this without you!

*Special thanks to Donald McGilchrist, whose Briefing Paper on The Navigators’ High School Ministries Around the World provided most of the information about the early decades of The Navigators and Eagle Lake Camps, and who checked the article’s facts!